I had a wonderful time at the Creation Northeast Festival!

However, it was a bit crazy since my son won his first baseball playoff game in extra innnings on Tues. night before Creation, he had to return Thurs. night for his next playoff game. So hubby and I met halfway on the PA. turnpike, switched kids, and then did the same thing again on Friday. However, I am glad each of them got to enjoy the “Creation Fest” experience. They both loved it in their own ways, and for me it was precious time alone with each of my kids. 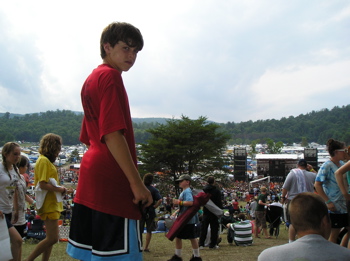 My son in front of the Fringe Stage

I can assure, it was a time of making many special memories, including…..

It was so stinking hot on Wed., instead of carrying the ice back to our tent, I wore the ice as a hat!! 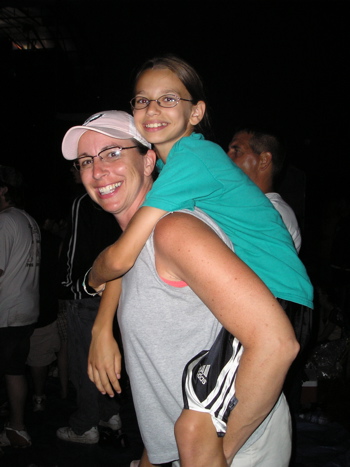 Dear daughter on my back during David Crowder, this way she could get a better view…..notice I am wearing a hat,everyday is a bad hair day at Creation!

Here is a list of the bands I saw and my impression of each. They are in the order I saw them

Skillet – nothing great, our first concert of Creation

Bethany Dillon– She is such a sweetheart with her cool southern accent and her heart of gold. I wish I could have brought her home with me!

Family Force Five – We saw them on the Fringe stage, they have a bizarre, high energy show! Heck they have a drummer with the nickname, “Crouton.”

KJ-52 – This guy has a great sense of humor that he incorporates into his show. Although I am not a rap fan, I liked his show!

David Crowder Band – This guy is so eccentric, and has lots of fun on stage. Yet he sets the tone for worship, and has a way of drawing you into worship. I loved his version of Amazing Grace and Come Thou Font.

Third Day– I always love seeing Third Day live and have seen them several times before. So this night I had to leave early ( which was 11:15pm), dear daughter was with me and we were both so tired.

Thousand Foot Krutch– I didn’t know much about this band, besides the fact that they rock out! But they certainly have a bold heart for God and have a nice enough mix of mellow stuff that it kept me interested.

Leeland – The lead singer for this band has an incredible voice, at first I wasn’t really into this band, and even dozed off for a few minutes, but as the concert went on I was drawn into it, and ended up enjoying them immensely.

Toby Mac– This was probably my other favorite concert at the Creation Festival, Toby Mac has so much energy….and he is my age! He and his band put on a heck of a show, with break dancking on stage, back flips, and synchronized energy! I loved his song, “Love is in the House”, and of course he did the classic Jesus Freak from his DC Talk days and everyone went crazy, including my old 43 year old body along with my 12 year old son!

Casting Crowns – Wow their show is powerful, I think that is because their songs say so much. We did have to leave early and didn’t see the entire show. I left around 11:00 since I had a 2 hour drive ahead of me that night.

~ Thank you to everyone who makes Creation Festival a success, I know our family appreciated your efforts! ~

Wife to my sweet husband who was diagnosed almost 9 years ago at age 46 with Alzheimer's. Walking the journey with our two children now 24 and 22 with our eyes on God. It ain't always easy, but God is in it! Follow our blog at: https://samismom22.wordpress.com/ View all posts by Sandy@ Jesus and Dark Chocolate

Error: Twitter did not respond. Please wait a few minutes and refresh this page.