I remember the moment well…..It was about 4 and half  years ago, I was at Madi’s cross country meet.  Shortly after the gun went off for the start of the race, Curt called me.  He had just finished his 5 hours of memory testing with a neuro-psychologist.  The Dr. was asking that I come in for the follow up appointment and Curt wanted to know what day worked.  It was at that moment, on a brisk fall day during a cross country meet, I had this sinking feeling of the storm that was to come.   He then called me back as he left the office and told me how miserable he had done on the testing.  He explained to me how he could not draw this “stupid” clock he was asked to draw, how he could remember details of a story passage that was read to him but had no idea the over all story line, how he could not even draw a simple square to start a 3-D drawing and on and on he went.  Just as I saw Madi  coming towards the finish line to medal in this meet, I stood there also hearing the words from Curt that would change our lives forever.

And so began our Alzheimer’s journey at age 46.   So on this snowy day in March, I find myself  thinking back on all that we have endured that last few years. And there have been many ups and downs on our roller coaster ride.  I also realize all that I have learned along the way!  So here are my random thoughts today….warning they are random!

Curt and I really did have a good marriage.  Things got a little muddled and not so good about 2 years prior to his diagnosis, but now I realize what I was seeing was not the start of marriage problems, it was Alzheimer’s. 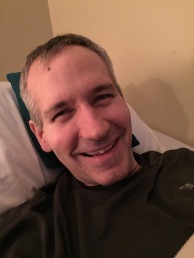 A sense of humor goes a long way in a marriage.  The ability to laugh at your mistakes and laugh with each other is a gift.  I can’t tell you how I miss so many of the silly sayings we used to say to each other and our stupid jokes. Sometimes,  I can still say them and get Curt to laugh…..but other times it is all forgotten.

Curt always used to say in a fun loving, yet serious way, “Got to please the babe.”  Meaning he was always about what he could GIVE to a marriage not what he could GET from it.  He always led with that example well, but some times as in any marriage that attitude would get lost, but I see now more than ever that was a driving force in all he did.  I still see a glimpse of that attitude from him now and then amidst the Alzheimer’s brain fog, it reminds me of how deep rooted his desire to give more than get in our marriage was.

So many of the little annoying things that Curt used to do, really don’t matter now.  If I could go back and change something,  I would not let those things bother me.  I see now how in the big picture of life, dumb stuff like that is a waste of time to get caught up arguing about.  So what if I would do something different, his quirky or annoying things were Curt and that was who he was, and it’s those things I even miss! 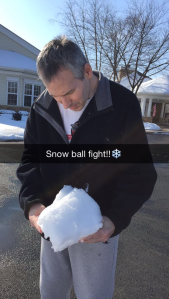 When helping someone in a crisis or in great need…..it’s the “doers” not the “sayers” who make a difference.  Many people mean well and say so many nice things and offer to help, but it’s those who take action that make the biggest difference.  Those that help with the practical stuff.  There were times that our dirty laundry pile was so huge, I would just have to wear “dirty” clothes to work ( true confession folks, but when life is crazy I was just happy to show up to school what I was wearing really didn’t matter, I was there).  I would find what I needed from the laundry pile stick it in the dryer with a dryer sheet and then wear it.  There were several times when a dear friend and Curt’s caregiver would help with the laundry, THAT WAS A HUGE HELP!  Someone even came and cleaned out my fridge one time, really you get over being embarrassed about the moldy stuff growing. 🙂  It was those practical, hands on things that helped so much.

I have learned a lot about trusting God.  We often say we Trust Him, but geez, I said that, but did not truly Trust God.  It’s so easy to trust when things are going our way.  But the real struggle is learning to trust God when things don’t go according to OUR plans.  I have prayed, yelled and screamed at God and begged for my plans, goals, and wants to succeed.  I often have felt God did not answer my prayers……but I have come to realize He has answered them according to His plans not mine.  He sees the big picture, I see a glimpse of it and think I know what is best.  But I am always reminded of Proverbs 3:5~TRUST in the Lord with ALL your heart and lean not on your own understanding. ~ I had heard that verse a million times, but now I think I really get what it means!

And that’s it for now……..lots more I could share, but I must also get those FAFSA’s filled out and get all my tax info together on this snowy day. We appreciate your ongoing prayers for the uncharted waters that lay ahead.  Its been a crazy journey for our family.  I do see the wear and tear of it all starting to wear us down a bit.  Thankfully, Curt at this point is pretty stable lately.  He has some rough days and moments but over all seems pretty steady.  He still retains that great sense of humor.  Just the other day one of the staff members was teasing him, saying, “you wanna go?!”  (Curt would always say that, and try to fake fight ya) Curt smiles, and replies clear as could be, “I don’t want to hurt you!”  He is my honey through it all. ❤

Wife to my sweet husband who was diagnosed almost 9 years ago at age 46 with Alzheimer's. Walking the journey with our two children now 24 and 22 with our eyes on God. It ain't always easy, but God is in it! Follow our blog at: https://samismom22.wordpress.com/ View all posts by Sandy@ Jesus and Dark Chocolate

Error: Twitter did not respond. Please wait a few minutes and refresh this page.